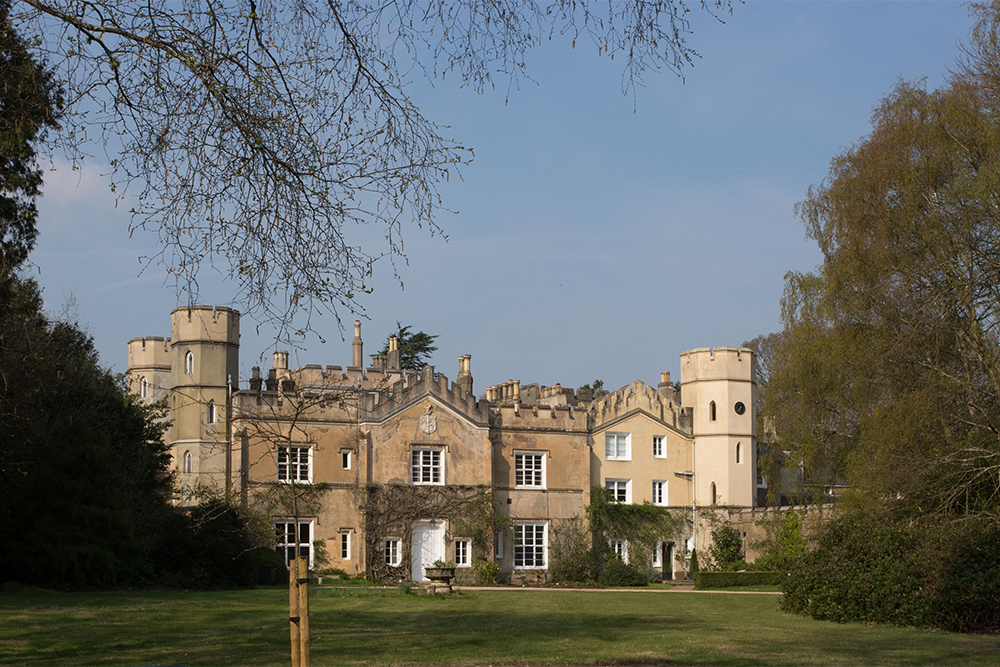 The original building is a Strawberry Hill gothic country house dating from 1805, which is listed grade II.  The house sits in a secluded location in the South Downs in a beautiful landscaped garden setting.  The house had a rich history, Winston Churchill and Kaiser Wilhelm (amongst others) had been visitors in the first years of C20. However in the years following World War I the house fell into semi-dereliction, and during World War II it was requisitioned for Army purposes.

By 2016, the central section of the house, with six bedrooms and including the stair hall and the original principal reception rooms, was in poor condition with the original entrance hall stone floor remaining badly damaged from the war years and evidence of decades of leaks and rising damp; cracked ceilings and rotten windows.  The house also displayed poorly considered alterations to insert bathrooms and kitchens from the mid C20, badly executed and with failing services.  The house was also extremely difficult to heat, given the 14’ ceiling heights and draughty sash windows throughout the ground floor.

Listed building consent was sought, negotiated and granted for a round of internal structural alterations, mostly ‘unpicking’ earlier C20 subdivisions in order to reveal the original majesty and proportions of the rooms better.  Nicholls Countryside Construction started work on site in September 2017, with a major focus on a complete overhaul and modernisation of services.  A ground source heat pump was installed to provide constant and efficient background heating to maintain a level of comfort and keep damp at bay; when desired temperatures can be raised and boosted still further by three newly installed log burners complete with flue liners bringing redundant flues and chimney stacks back into use.

A completely new and comprehensive lighting scheme was installed, comprising purpose made and carefully researched vintage fittings which highlighted the original and restored ornamental plasterwork.  The original quartersawn oak floorboards were taken out to allow for the floor void to be dug out and an insulated and ventilated void replaced, then the boards were denailed, resurfaced, relaid and refinished to spectacular effect.  The stunning glazed and cut crystal stair hall ceiling, which evidenced decades of neglect and leaks, was stripped back to the timber substructure; the glass panes were carefully cleaned and the whole assembly painstakingly rebuilt to the original design to stunning effect. 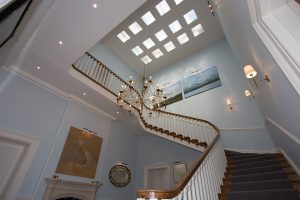 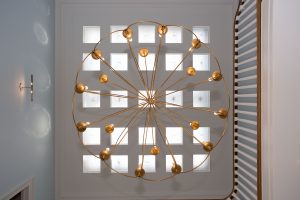 Drainage runs (which had performed poorly causing leaks and damage to historic building fabric) and bathrooms were completely rebuilt, radiators were refinished and new joinery elements installed for dressing rooms and living rooms.

A new purpose made kitchen was installed in one of the rebuilt principal reception rooms to deliver a spectacular result, see below. 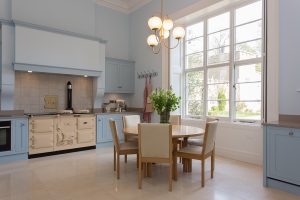 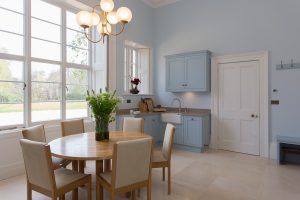 At the same time the landscaped grounds to front and rear were redesigned, new planting and water features installed, and the gravelled front drive levelled and refinished. 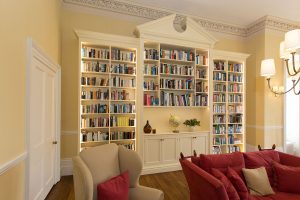 The whole project showcases how modern technology can be used to transform our wealth of historic buildings from interesting museum pieces to beautiful, comfortable and elegant residential accommodation, adapted to suit modern expectations and lifestyles.